The Outback of Oliver!

Some mornings a second cup of coffee just barely gets me started. 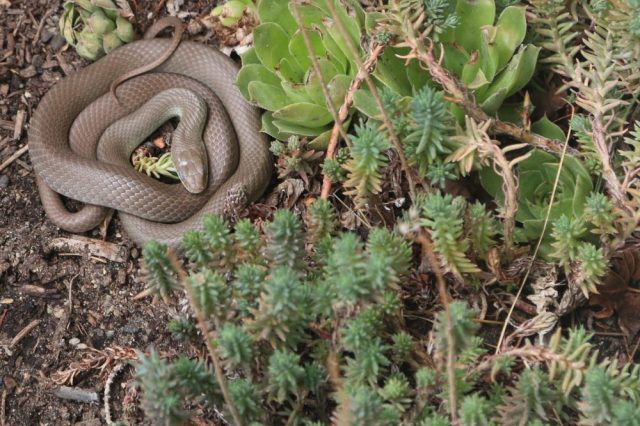 However I just about stepped on a snake on the front step first thing in the A M. That  gets the adrenaline pumping. Apparently, this Blue Racers has taken up residence under my steps.

This wild life encounter was followed by a wasps nest under the hose caddy. I like the composition of it but it too has to go!

About an hour later I decided to check on the irrigation and found I have a designer rat in the crawl space. Some irresponsible person had a pet rat, it got too big, they let it go at the river and it has decided to move in as well. apparently this happens a lot! I am waiting for the exterminator as I type.

To end this day perfectly, just after 8, I watched this little bandit ransack my cherry tree. just one of the many reasons, this city girl lives here!

Needless to say The Wee Shaolin is grounded in the house for the rest of her life. The snake is in one of her fav sun spots . . oh good! Really don’t want her to bring it into the house! And an encounter with a racoon, not a good idea.

I wonder what brought all these guest to the yard? one thing for sure is it must be a health pesticide free zone.

The gallery has been closed a week now and that is wonderful. The garage sale was a whopping failure! I thought for sure I would make enough to fund my retirement.

Looking forward to a great week!